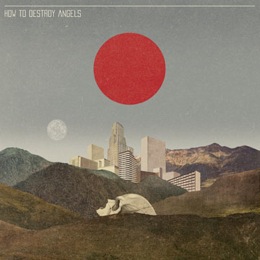 Nine Inch Nails, at least for the time being, is no longer a major talking point. Reznor is not touring under that banner anymore, and in the band’s wake we have a massive catalog of studio work and remixes and “rarities” to sift through. The past couple of years has seen Trent Reznor in a semi-feud with Radiohead, a balls-out beef with Twitter trolls, an empire from alternate reality, and an experiment out the ass with The Slip and Ghosts I-IV — all the while, he’s now officially both a free agent and a married man (explain to me how that works?).

Reznor and his lovely wife, former West Indian Girl member Mariqueen Maandig have begun collaborating on a brand new project together, entitled How To Destroy Angels. In true Reznor fashion, the debut EP was released to the public for free this past week. The question: Is it any good? HTDA is a succinct, healthy blend of “Rabbiteen”-era Jack Off Jill, With Teeth percussion (“Fur Lined”), nuances from everything Reznor post-’99, and aside from some minor harmony contributions on “BBB” and “Parasite”, you hear nothing from Maandig’s scheming husband, leaving one to believe he was more focused on the production end this time around.

Overall, HTDA is as appropriate an EP as you could ever get from this new project. There’s a great introduction to Maandig’s presence on the extremely haunting opener, “The Space In Between”, accompanied by Fragile-era  instrumentals in the backdrop. Aspects of Year Zero reign as a signature glaze throughout the marching beat of “BBB” and the static-heavy “Parasite”. And if you couldn’t tell already, each song on the EP is its very own entity, with only blatant production techniques holding it all on a common. but nonetheless reputable, tangent. There was talk about whether or not this could be a precursor to “happy” NIN songs, but we can leave that kind of social networking hearsay in the dust now, it seems.

Between the long, tempered closing of “A Drowning” and the music video for “The Space In Between”, highlights are so diversified in this sampling one would be hard pressed to dissect it, especially given the small amount of songs present. Much like Broken EP or The Slip, HTDA can stand on its own and also possibly prove a stepping stone to a new evolution in the respective artists’ catalogs — for Reznor, something more atmospheric and positively charged, for Mrs. Maandig-Reznor, perhaps a more progressive vocal delivery and subject matter?

An unfortunate thing with HTDA is its low-key existence on the whole. Once everyone discovered the man behind the MacBook (as if there weren’t any subtle clues in the musical style alone), the website tumult subsided, the singles were released alongside a very disturbingly realistic music video, and everyone went about their merry way until the EP in full began surfacing. For its share though, HTDA leaves a memorable mark, if you were one of those dedicated fans of West Indian Girl and NIN, like myself, who adamantly downloaded the new material.

I am certain that there will be those who slander the album, calling it everything from disjointed to “too much like NIN”, and while the latter might be true in essence, How To Destroy Angels does its job — it introduces the world to a new and unlikely partnership that is free to explore any and all possibilities allotted it. Why? Because it’s fucking Reznor – the so-called “disjointed” characteristic lends this EP one of its best traits, that being a platform for experimentation, which was expected. One could nitpick and call HTDA “Abridged Ghosts, with vocals”, but admittedly a lot of us wanted that anyhow, so who on Earth would complain?

Besides the Twitter trolls, that is. Posts Of Fangirls Aghast, indeed. As Shaggy would say, “Shut it!”