The Replacements – Don’t Tell a Soul 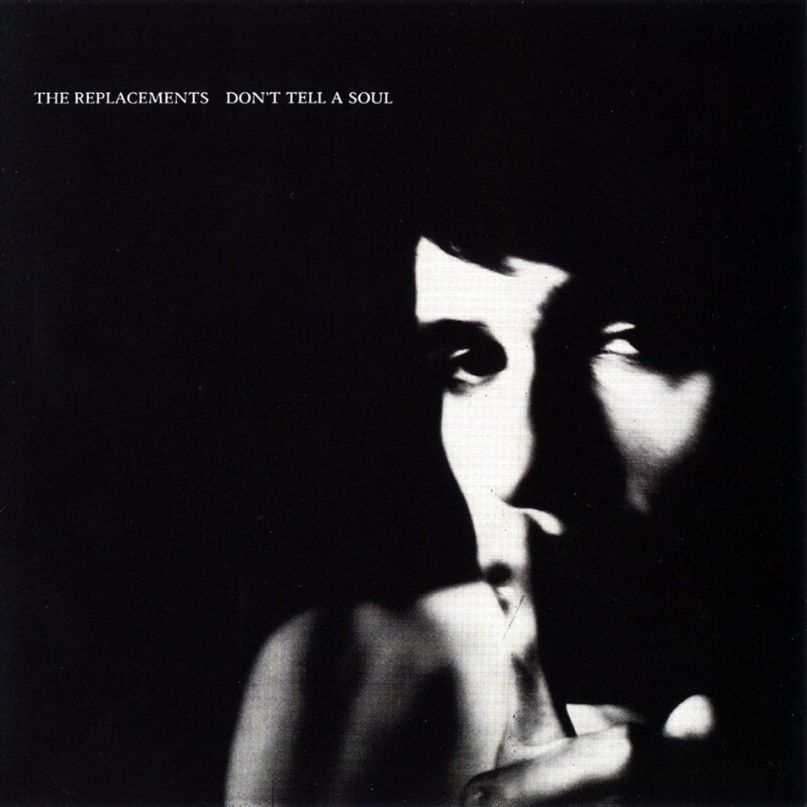 Die-hard fanatics scoff at this release — hell, they might even throw up a little in their mouths — but they’d be ignoring one diamond of an effort. Yes, that statement still rings true whether or not you include “We’ll Inherit the Earth”, the poppy ’80s ballad that could fit comfortably alongside The Simple Minds, or anything off of a John Hughes’ film, for that matter. Whether you loved ’em for chugging beer ‘n’ decking out sloppy chords, or you cherished every breath and word from Paul Westerberg, The Replacements made it really, really hard to feel disconnected.

Although it helps if you’ve survived a couple of winters in the Midwest, the rat pack from Minneapolis scrounged up enough music to speak a thousand tongues. “I Will Dare” provides a perfect blank sheet of solace for any straggly twenty-something, while the punky chaos of “Kids Don’t Follow” embalms just about every angsty emotion that comes with a birthday cake and 13 candles. The ‘Mats, the boys’ popularized (and shortened) nickname, never spoke for just one group, they spoke for themselves, and as a result, we all sort of caught on. Even 10 years later, approaching a smug and happy 30 years, it’s easy to smile while Westerberg croons about “a dream too tired to come true.” Ah, there lies the deep power and mystery that is Don’t Tell a Soul.

Released in 1989 and produced in, of all places, Los Angeles, Don’t Tell a Soul finds The Replacements amidst an odd lineup (namely guitarist Bob “Slim” Dunlap, who stepped in for Bob Stinson), a different, more mature sound, and a new producer. Originally recorded at Bearsville Studios in Woodstock, New York with producer Tony Berg, the band (surprisingly) didn’t enjoy the crunchy, more lo-fi sound and opted to side with Matt Wallace in the sunny west coast. What’s remarkable, however, is that while some may argue this shifted the band’s roots incredibly, this seventh LP bleeds of Midwestern flavor.

“We ain’t much to look at so/ Close your eyes, here we go,” Westerberg starts, adding shortly after, “We’re playin’ at the talent show.” It’s such a bubbly head-bopper that you forget its core meaning. It’s the band being as honest as they’ve ever been. It may be polished, it may be clean-as-fuck, and yes, the group’s trademark, gritty undertones have vanished, but when they hock a loogie of a line like “We might even win this time, guys, you never know,” it’s apparent that this is nothing more than the boys being absolutely blunt with their fanbase.

Sure, songs like “Back to Back” and “We’ll Inherit the Earth” seem cringe-worthy, especially in stark contrast to the band’s canon of work. However, under its ’80s influences lie some great writing. When Westerberg sings in the former, “Why don’t you put a book upon our heads/ And put some pistols in our hands/ Count 20 paces at dawn/ Count 20 questions we’ll get wrong,” you can easily scoff at the imagery, but the way he sings it sounds so damn sincere. And while there’s not much to pull from “…Earth”, Westerberg’s vocal breakdown towards the end, which essentially amounts to a “Fuck this”, reminds us that we’re not listening to Real Love or just some crummy write-off.

But that’s it, really. Once you shift past those two songs, the real beauty of the album starts to surface. The country, college rocker “Achin’ to Be”, arguably one of the band’s most timeless tunes, arrives just in time. Everyone starts to shine, too. Westerberg sings so damn earnestly you’d think he wrote the song as he recorded it, while Chris Mars scratches up a clean shuffle. When you’ve finished listening, however, it’s Tommy Stinson’s bass lines and Dunlap’s fills that stick. Instrumentally, everyone’s on the money on “They’re Blind”, but in hindsight, it’s one of many tunes (even on this album) that foreshadow Westerberg’s eventual solo career.

What’s astounding is that no matter how polished, or structured, these songs come off, they never once deviate from the ‘Mats sound. The loud and jangly “Anywhere’s Better Than Here”, which sports one of Mars’ greatest percussion pieces, doesn’t work with the sloppy antics of say “Fuck School”, but the same mentality is there. It’s clean, but it’s not. The same goes for “Asking Me Lies” and the remainder of the record, come to think of it. Reason being, no matter how layered the musicianship may seem, or how advanced they’ve come, they’re still writing stories set in the same towns, neighborhoods, and most importantly, the same mindsets. Westerberg keeps it pretty vague on “Anywhere…”, but when he etches out the scene by whisper-screaming (That makes more sense than you’d like to think), “You press your luck, up against his body,” it’s hard to imagine it playing out anywhere but a sleazy bar in the cold confines of Minneapolis, or Chicago, or fucking Detroit, for that matter.

Then there’s “I’ll Be You”. You know, say what you will about any track off this album, but if this one doesn’t get you, then The Replacements aren’t your bag. Over chugging guitar chords, skin tearing lead work, ghostly piano fills, and one soldiering drum beat, Westerberg lays out his band’s music in just under three-and-a-half minutes. On the surface, it’s college rock… probably the greatest college rock anthem ever. But at its core, it’s so endearing and heartfelt that it’s impossible not to enjoy. When Westerberg raises his voice a tad at the end, singing “A dream too tired to come true,” hairs stand up, childhood memories race back, and tears tease the eyes. The word “If” takes on a whole new meaning, too.

Things wrap up fairly soon, but not before they throw a country farmhouse shindig (“I Won’t”), tell a foreboding eulogy (“Rock ‘n’ Roll Ghost”), and an angsty, nostalgic walk down heartbreak lane (“Darlin’ One”). The former starts out like a Hall & Oates tune, before dissolving into a rusty country shuffle, complete with spitfire verses (“Do you want me back at yackety-yack?”) and lush-yet-sloppy instrumentation that somehow remains structured. “Rock ‘n’ Roll Ghost” rents out The Police’s synths (think: “Invisible Sun”) yet issues the group’s most personal and introspective songs in their discography. When Westerberg brushes off a line like “Well, you said, ‘He’s better off dead'”, it only hurts more year after year, especially if you’re familiar with the band’s history and the Stinson family. It could end the album, but they opt to kick things up a notch, instead.

Don’t Tell a Soul closes with an anthem. Over sparse lead guitar, soft acoustics, and a rollicking rhythm section, “Darlin’ One” shares more with U2 than The Replacements. Hell, even Westerberg’s smoke-filled vocals seem to channel that of Bono’s here. But if you focus some, you can argue that it’s a band who’s come to terms with attempting success. Rounding out the themes already discussed on album opener “Talent Show”, this one reaches a resounding conclusion, by juxtaposing this conflict with success  against the one natural thing: fractured love. Westerberg may say, “Hey, darlin’ one, your time has come,” and we may relate this “darlin'” to our own bittersweet romances, either with Sally Sue or Becky next door, but who’s to say this “darlin'” isn’t the band itself. Given the resulting backlash from die-hard fans, at least on the album’s initial release, it makes sense for Westerberg (and the band, for that matter) to have worried about being “banished forever from the sacred nest.” Then again, it could just be a simple, explicit pop-song.

But isn’t there a saying that goes something along the lines of “the heart never leaves the home?” That seems to be the case with Don’t Tell a Soul. Even if you believe The Replacements tried to break through commercially, that this album reflects a change of their honest Midwestern sound (for better or worse), they never really crack the shell. If they did, they were looked on as tourists. Simply because they always kept one foot in the door of their musty yet homely Minneapolis confines. It’s a predicament, sure, especially if they truly wanted success. But it’s one that, after all these years, has kept them a cut above the rest. Even with a different lineup, a new producer, and the plasticity of California, The Replacements could never sell their own souls. Thank god for that. Because in today’s day and age, it’s that sort of mentality that reigns king – maybe not commercially, but definitely critically. Well, consider these folks a timeless dynasty. Just don’t tell ’em that.