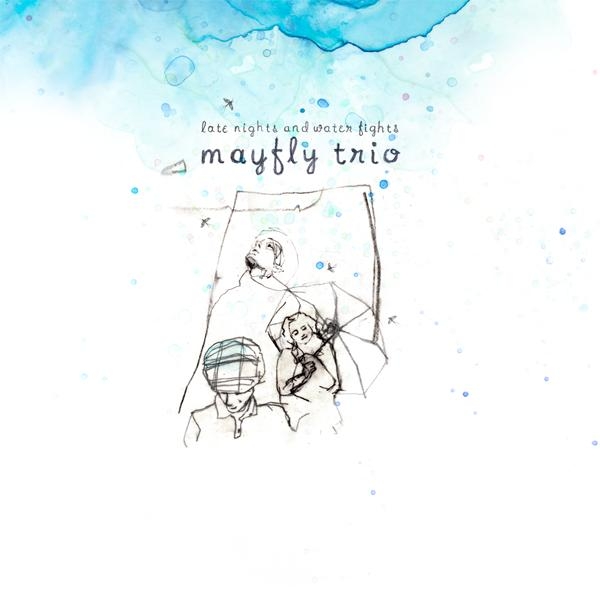 We don’t expect many of you will have heard of the Mayflys before now but the London ensemble’s debut self-release, Late Nights And Water Fights, is well worth the long hop across the pond. This charming and self-effacing record offers an enticing, eclectic mix of largely acoustic jazz-pop with a helping of funk and soul beats. Erstwhile known as the Mayfly Trio, featuring vocalist Aurelie Konter, guitarist Dan Godfrey and Chris Hudson on bass, the band is now four-strong with the addition of percussionist, Rob Wilcox. The new boy doesn’t actually appear on Late Nights but can be heard to good effect on a new demo EP, My Doll, showing that this band has no intention of standing still.

The album title recalls the band’s student days (not that long ago) when house parties regularly ended in water fights or similarly modest mayhem. There is even a song on the record called “Pete Getaway” in honor of a fictitious character they invented to pin the blame on in the aftermath of said misdemeanors. The album opener, “Hold on Care”, is one of the first songs the band put together and like much of their work, overflows with rhythmic ideas and intricate sounds joined up by Konter’s dreamy, scat-style vocal. It includes a long and otherworldly bridge which cleverly sticks to the right side of the line of indulgence. Songwriting and arranging is obviously a collective thing and this helps to keep the music fresh and always challenging. Producer and musical director, Mike Greenway, should also take credit for giving the young band rein, while keeping a structure and a sense of economy to things.

The results are captivating and highly individual. You immediately imagine that this band would be great live on a sunny festival stage in the afternoon. The sparky come hither vocals of French born Aurelie Konter combine sweetness with substance, purity with bite, while Godfrey’s intricate guitar patterns and Hudson’s fluid bass keep the music consistently interesting. This comes with some sacrifices to commercialism and radio friendliness, but then the brain dead are unlikely to be on this band’s radar and there are compensations. You can happily listen to Konter in her mother tongue on the quirky “Guacamole” without understanding more than the odd few words, nor realising that the song champions the singer’s own recipe for an avocado dip. You can hear her sing in Spanish on the tongue-in-cheek, summery “La Espanola” too.

Late Nights runs to just nine tracks but there’s no filler, just a musical buffet you can dip into with relish. There are at least two outstanding songs on it. “Mean to Me” is all about the singer’s little brother, and it’s delivered with great verve and has a splendid hook to add to your memory bank. As on the opener, there are times when Konter’s delivery puts you in mind of Corinne Bailey Rae in its now soft, now strong inflections. “Powder Snow” is a particular crowd favorite live and the white stuff referenced in the title is the sort you find on slopes. This wistful and engaging song was written around the time the band went on a skiing trip to France. It has some unusually subtle brass section sounds, great jazz guitar and another killer vocal, from the softly reflective start to the powerful closing build. With the best of the Mayflys’ work, you can listen again and again and find new things.

The enigmatic “Promenade”, funky hedonistic “What’s Up”, and emotional and pensive “Sigh Song” complete the collection on Late Nights And Water Fights. Each in its own way reveals a different aspect of the Mayflys, reinforcing the feeling that this is a band with a lot to offer now and one which promises much for the future.