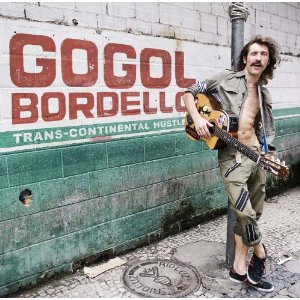 Gogol Bordello has come a long way since its charming debut record Voi-La Intruder, which helped pioneer the entire genre of gypsy punk that came out in 1999. Once a little known band of free-spirited gypsies and now a pack of frenzied lunatics that have successfully obtained world domination, it’s hard to ignore the effects Eugene Hutz and his raucous troupe have installed over the last decade.

Since they hit big with Gypsy Punks: Underdog World Strike in 2005, Gogol Bordello has traveled to the furthest extents of the world spreading their “carpe diem” mantras and slowly winning each respected entire nation with its unique blend of musical genres and intoxicating energy. This continued after the group’s next release, 2007’s Super Taranta, and during the last three years they’ve been touring the world; sweating their asses off, screaming until they lost their voices, and playing their instruments until their fingers bled, never once thinking about themselves or the need to rest. It was pure, raw, irreplaceable live energy, but all good things must eventually come to an end, right? This brings us to the present where the “new” Gogol Bordello has just released its latest opus Trans-Continental Hustle; featuring a very different Bordello kind of sound.

Trans-Continental Hustle begins with the delicious first single “Pala Tute”, which follows in suit with much of their previous material. With its booming bass drum, whirly violin and accordion solos, dominant guitar riffs, and simplistic thumping bass, “Pala Tute” has the signature Gogol Bordello stamp written all over it, so much in fact that certain segments sound extremely familiar to at least three separate songs from Super Taranta. Even still, it’s a great song that you can’t help getting swept up in. Next up is “My Companjera”, a personal favorite and super catchy number that instills memories of showing up alone to a wild party and spending the whole night wishing your best friends were there to dance with you. Then things get taken down a few notches with the very peaceful and melodic “Sun Is On My Side” that shows dominant South American influence particularly from Brazil and features an amazing blend of acoustic and rhythm guitar.

Things don’t stay down for too long though with “Rebellious Love” booming from the streets shortly after with a dominant focus on strings as Hutz screams “Capture, capture, capture/Will they ever capture one another?/Will the cowards ever capture us?” Next up is a classic gypsy punk melody, “Immigraniada (We Comin’ Rougher)”, which breaks out into a fast paced, head banging chorus perfect for any fun mosh pit. But you can only maintain that energy for so long which is why the much slower “When Universes Collide” arrives next, slowly building on itself at the end in preparation for the next tune heavily drenched in Mexican and Puerto Rican influence entitled “Uma Menina”.

From here on out Trans-Continental Hustle keeps you on your toes with a slew of songs that are all individually great, but still seem to one up each other as you progress through the rest of the album. First we are thrown the inspirational tune “Raise the Knowledge” which instills hope for change through revolution with Hutz leading the pack singing “Revolution is internal/Help yourself at any time/Evolution isn’t over”. Then, things slow up a bit one last time with “Last One Goes The Hope” featuring a beautiful accordion part and some funky solos from Pedro Erazo sung in Spanish. Next is another personal favorite, “To Rise Above”, which drives forward with pumping bass as Hutz reminds us of the wonderful feeling of falling in love as he sings in broken English, “I don’t know if anywhere in this universe there is this kind of love/I don’t know if anywhere in this universe someone like you to know”. Then a few songs later things come to a close with the epic title track featuring the wonderfully strange sounding Cuica or in other words a Brazilian friction drum. It’s got spunk and raw energy that picks you up and drags you around the room in a flurry of lights and movement only to abruptly drop you down and leave you wanting to listen to the whole album all over again.

Overall, Trans-Continental Hustle is yet another solid piece of work from the maniacal gang of gypsy punks otherwise known as Gogol Bordello. I’ll admit that it took quite a few listens for me to fully appreciate this album. It’s definitely the sort of album that grows on you, as it initially sounds much different from the band’s last two albums, finding its roots in a unique hybrid of sound that pays tribute to their early days (think Multi Kontra Culti and Voi-la Intruder) while simultaneously introducing a new slew of instruments and a heavy fascination with all things Brazil. Trans-Continental Hustle only further proves the band’s ability to continuously develop and improve their sound with new direction, foreign instruments and a heavy focus on multi-cultural world influence. Is there anything these guys can’t do right?