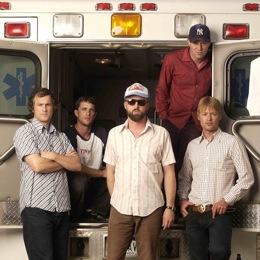 Back in October 2009, we said that Cake, everyone’s favorite legends of alternative rock, were hard at work on a new album in their modified eco-friendly studio. While we’ve got no news on the album, their sustainability push did recently earn them the honor of being one of Billboard’s 10 most greenest bands on the planet. That means you can enjoy the lack of any new material since 2004 while comforting yourself with the idea that some carbon emissions have been reduced. Feel like celebrating that? Maybe letting the band know your level of discontent? Do it this summer when the band hits the road for a short summer tour.

The band plays a few shows throughout April, May, and June. There’s then a chunk of dates for July and September, with one measly date in August (in Alaska of all places). And there’ll even be a few festival stops, like at the Green River Festival and the 11th Annual Oyster Festival. Oysters and Cake? San Francisco get ready! And if the tour isn’t enough of a Cake fix, read the news flashes on their official site; witty, humorous, and insightful.

Tickets are on sale at Ticketmaster.com.