The Radio Dept. – Clinging To A Scheme 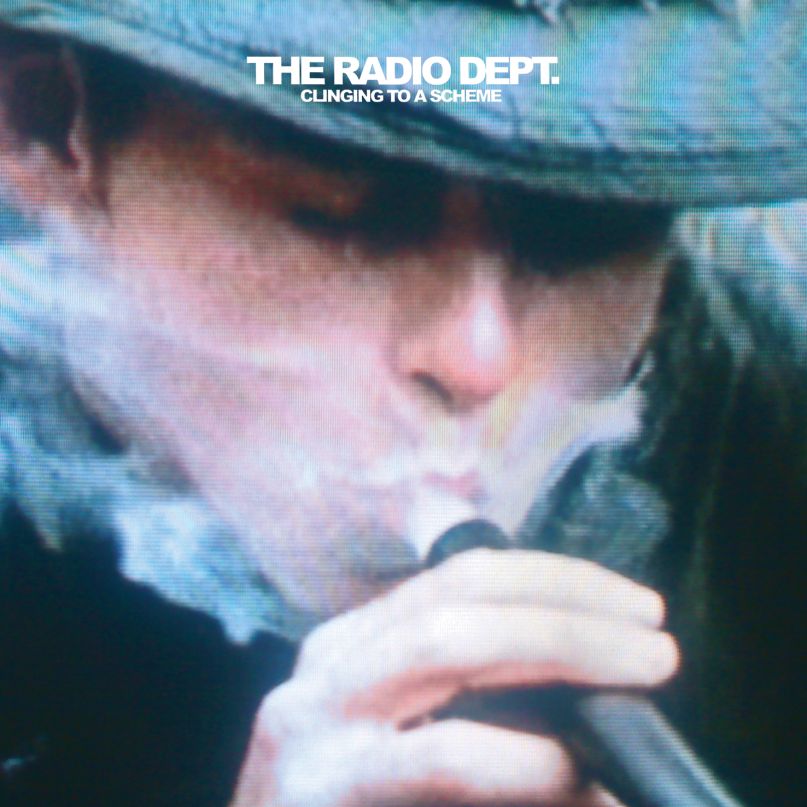 A cinematic cross-breed of synths and strings in the background, crispy, distorted and distinguished drums, a synth stab borrowed from the ’90s going with the beat, a tinkling piano mantra, an offshoot glockenspiel melody, and Johan Duncanson behind the classic The Radio Dept. filter singing lines like “and he spent some twenty years with this feeling of being lost inside”: The Radio Dept. is back with full force, if you would call it a force. In a pop context, “David”, which was released last year as a single, is subtle and hazily sweeping, at first even insubstantial. But as always with the band, something else appears and turns everything upside down.

To be honest, The Radio Dept. is a pretty stiff act. Their dreamy shoegaze pop has always been rooted in the traditions of Swedish indie pop. It’s shy, it’s sweet, it’s pop-nerdy, and it’s keen to choose DIY production over extravagant sound quality. Nonetheless, the instrumental approach is adequate and knowledgeable, mostly because they let their ’70s and ’80s influences wash over them. Krautrock, shoegaze, post-punk, and synthpop melt together. Pop-cultural references and semi-political lyrics are also important parts of the Swedish indie sound which The Radio Dept. has been more or less leading. They haven’t strayed far from their original concept or sound through these three full-length records, only modestly expanding it.

The well-known filter The Radio Dept. uses in their production seems to freeze time — a time that they seem to have borrowed from somewhere else in history, encapsulated and poured into their recording sessions. Skeptics claim this band is chilly, calculating and merely regurgitating cornerstones of their musical preferences. Clinging To A Scheme clings to the scheme, and operates with an awareness and precision few bands can mobilize. Yet what these 10 songs present are something much more than every tastemaker popster’s wet dream of adequate and credible pop music.

Songs as sweet as “David” can’t be overly calculated and lack real emotion. The band may be at the height of their ability on this album while creating their brand of pop that sounds like it’s coming out of an old time radio. Clinging To A Scheme features every detail and factor that we’ve loved The Radio Dept. for in a suspiciously rewarding way. The Radio Dept. sounds more like The Radio Dept. here than The Radio Dept. do. Does this automatically mean that Clinging To A Scheme tops both Lesser Matters and Pet Grief, that this makes it their best album yet? No, it does not. But it still is.

Every song is purposely focused without giving up on the magic that keeps surrounding this band and the quality never dips. It’s a fully realized album where every song perfectly embeds Duncanson’s dead-pan voice forming words of youthful bitterness and longing. “Leaving just in time” is repeated on opener “Domestic Scene” to a slightly horrifying effect, and on the calm ballad “A Token Of Gratitude” it becomes clear that only The Radio Dept. can make desolated magic out of a simple question and just as simple an answer: “Do I love you? Yes, I love you.”.

The Radio Dept. truly is a pop enigma. No band makes shoegaze sound so pop, or pop sound so shoegaze. Dreamy, wispy soundscapes, and a lo-fi filter have never been combined with sweet pop music in quite the extraordinary way that this band handles it. On this album, all this comes together beautifully and puts everything we thought we knew about the derogatory term shoegaze on its edge. The only thing that I bear a grudge about is that Clinging To A Scheme didn’t come earlier in my hard teenage years. The main reason why, which also captures one of the essential parts of the band, is the blunt Thurston Moore quote they’ve sampled in the beginning of the lovely summery single “Heaven’s On Fire”:

Reporter: People see rock’n’roll as youth culture and when youth culture becomes monopolized by big business what are the youth to do? Do you have any idea?

Thurston Moore: I think we should destroy the bogus capital process that is destroying youth culture.