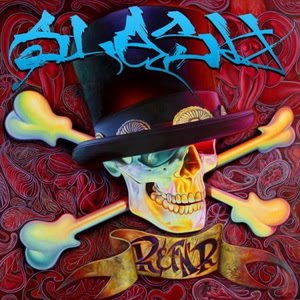 Guns ‘N Roses used to be one of the greatest rock bands in the world. Their music reached millions of people worldwide and their songs are still screamed poorly at karaoke nights, sporting events, and drunken parties. They were part of the last vestiges of the 80s hard rock era that weren’t completely shut down by the grunge movement in the early 90s. Axl Rose’s soaring vocals over Duff McKagan’s bass, Izzy Stradlin’s rhythm guitar, Steven Adler’s pounding drums, and Slash’s blazing guitar solos are as recognizable as most anything in music these days. After four popular albums, inner turmoil with personnel line-ups, and Rose’s unpredictability caused the core members to leave one by one. Rose tried to hold on to their popularity through the years, but ended up making more of a joke of the band than anything. Remember how we all waited 15 years for a new GnR album? Only to find it was Chinese Democracy? Sweet. Thanks Axl.

In that “hiatus” time, the core members moved on to side projects, with no one becoming as popular again as Slash. Slash is near the top of many “Top Guitarist in Rock” lists, and it’s not without justification. The guy can freakin’ shred a guitar wide open. You can love the music that he makes or not, but it’s hard to disagree that he has talent. His side project Slash’s Snakepit and his 90’s rock supergroup Velvet Revolver have both sold millions of records and gained support from fans and critics alike.

I’ll be the first to admit that I am a person who understands Slash’s talent, but doesn’t always like the music he makes. GnR has some great tunes, but when it comes to the Snakepit and Velvet Revolver, well…I could take it or leave it. But when it came time to listen to Slash’s newest work, a solo album simply entitled Slash, I was very intrigued. I had no idea what to actually expect. Would it be like a John Frusciante solo album? Would Slash be singing somehow? Or would it be like the over-played, Grammy award winning Santana solo album, Supernatural (which, while catchy, makes me want to punch children)? I gave the album a solid listen at home and on the commute to work, and I have to say it’s somewhere in the middle with a lean toward Santana.

Slash’s talent and work — which also includes his time as a studio musician for just about everyone in the industry (Michael Jackson, Insane Clown Posse, etc) — has given him access to some great friends, and most of them show up on Slash. The Cult’s Ian Astbury, Ozzy Osbourn, Iggy Pop, Lemmy, and Dave Grohl—to name a few—all guest on the album. But all that star power can’t save the album.

Slash is a clean, shiny, and well-produced faire that reminds me a lot of the early 90’s sheen that was all over hard rock albums at the time. I’m not saying I want to hear a bad mix or poorly used effects, but it’s a hard rock album. Make it gritty. At least a little bit. Dull some of that shine a little. Osbourne seems to fit well into his song, “Crucify the Dead”, though mostly because most of his music in the last 20 years has been fairly clean cut. But when it comes to Lemmy’s tune “Doctor Alibi”, the Motorhead frontman’s trademark growl just doesn’t fit into the mold quite as easily. It’s a decent song, but would be better if the rest of the instruments were as gritty as his voice, bass and mole.

There are also the “what the fuck?” additions to the line-up. Singers such as Adam Levine of Maroon 5—kinda like Rob Thomas on Supernatural, but with far worse results—as well as Fergie and, to a lesser extent, Andrew Stockdale of Wolfmother. For Levine’s turn, “Gotten”, just think of a Maroon 5 love song with a Slash solo in the middle. Fergie…I have no idea. Her song “Beautiful Dangerous” is not quite as hard as she thinks she’s being. Actually, it’s about as hard as a Fergie metal song could be, and that isn’t a good thing. Andrew Stockdale makes sense because he is also quite the guitarist—even though he doesn’t play on the album—so that one is understood, and the song, “By the Sword” isn’t bad at all. His Axl Rose-esque vocals fit the song quite well. Same can be said for obscure pick Rocco Deluca’s song “Saint is a Sinner Too”, which reminds me of Led Zeppelin in a big way. Deluca’s vocals have a Robert Plant quality to them, and Slash’s arpeggio guitar is slightly “Stairway to Heaven” esque.

Chris Cornell’s vocals on “Promise” and Ian Astbury’s on “Ghost” are also some of the highlights of the album along with Stockdale and Deluca’s. “Ghost” is probably my favorite track of the bunch. It’s just a shame that it’s the first track. The opening guitar riff is one of Slash’s best in my opinion. Right up there with “Sweet Child of Mine”. Cornell’s performance on “Promise” is solid, and the song itself is a pretty good rock song. I think if Cornell were to tour as vocalist for this album rather than Alter Bridge’s Myles Kennedy (who is the only one to sing on two songs on the album: “Back From Cali” and “Starlight”), it would be a far better project.

Another highlight is the instrumental track, “Watch This”, that has Dave Grohl on drums and Duff on bass. It starts out hard and driving with Slash’s guitar blazing through a solo line with a continuous metal riff over the top, has a dreamy breakdown in the middle, before returning to the beginning riff blown wide open. I have always felt that Grohl is at his best at the helm of some good metal drums, and this track reaffirms that belief.

The other takes from Kid Rock, M. Shadows of Avenged Sevenfold, and the aforementioned Myles Kennedy are fairly unremarkable, and kind of get tossed in to fill out the album. Iggy Pop’s tune “We’re All Gonna Die” would be better if Iggy Pop was still Iggy Pop and not so focused on his new turn as a cabaret singer.

Overall this album isn’t horrible. It has some good moments that make it digestible, but the bad parts will leave you with a bit of acid reflux. If you love guitar solos and 90’s hard rock, you’ll like it a lot more than I did. It’s sort of a poor man’s (or white trash) Supernatural. Although I’d much rather see this album get popular than that one. And in the end, it’s a hell of a lot better than Chinese Democracy. So suck that Axl.