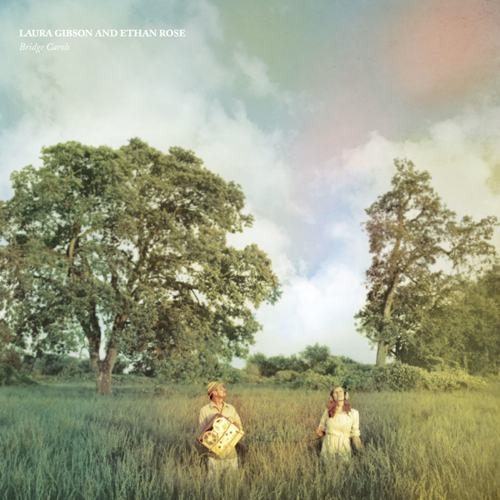 Bridge Carols is a new collaboration between Portland, Oregon folk singer, Laura Gibson, and soundscaper, Ethan Rose. Laura Gibson’s 2009 release, Beast of Seasons, drew some very favourable reviews but this new venture takes her into less charted territory. Gibson’s voice is used almost exclusively as an instrument as it interweaves with Rose’s archaic, tinkling or quietly resonant arrangements. The result is a quite exquisite but ultimately ephemeral collection of lyric fragments, which float dreamily over dismembered ambient instrumentals.

The album cover depicts the two protagonists waist high in grass, framed by two imposing trees. It could almost be a Constable landscape that they have straying into. “Introduction” is the opening track, though if you stream the record from the site kindly provided by Holocene Music it’s the last piece and the songs oddly are arranged in a different order. “Introduction” is not the easiest lead in as Gibson scatters a few random vowels over a distant, resonant tone poem of piano, drones and odd vibrating strings. Towards the end something that sounds like grass being clipped is introduced. Maybe they are still in the field.

“Old Waters” follows and it’s equally enigmatic. Gibson intones just four eerily indistinct lines before the waters that carried her here recede while echoing strings and plaintive horns provide a soft-landing. “Younger” is the longest and one of the more accessible songs, largely because it has a slightly more conventional structure and you can hear the words. “Where have you gone my pilot star?” Gibson muses as she explores story vestiges, childhood dreams and memories. Tambourine zils keep up a constant percussive ring alongside distended guitar and horn punctuations. Halfway through there is a mood change as a gentle acoustic guitar heralds Gibson regressing further back to childhood imaginings. “Younger” is captivating and beautiful, while the arty accompanying video is recommended viewing too.

“Leaving, Believing” begins more conventionally too as Laura Gibson delivers complete lines against a sparse backcloth but these then dissolve into mantra-like repetition of the title words. “Sun” is a soft, gently rolling paean with a hymnal quality to its short verses and again so sparse an instrumental counterpoint almost to emphasize its simplicity. “Boreas Borealis” opens with suitably ethereal sounds and plucked strings while Gibson sings of northern skies no longer black but burning as red as flame, interrupted by echoing droplets of water. The music is simply and starkly evocative of a sorrowful natural world and is played out with a poignant string-driven coda.

“Glocken” follows with all manner of odd ancient sounds from chimes to tortured strings and even sleigh bells. The weirdest of all involves something that sounds like short snatches of whistling played backwards. There are no vocals as such but Gibson then has the last word on “O Frailty”, a fragment of a song relic, which lasts less than a minute and features a disembodied vocal full of regret for times past. It provides an eccentric ending to a strangely surreal journey.

Bridge Carols is essentially music for meditation, something to take you away from both the daily grind and the modern obsession with instant communication. It has moments of great beauty and high art, but equally times when you wish for clarity and understanding, and not least for something more dynamic musically. Still it is a brave record and it is of some comfort that there is space in the musical spectrum for this kind of project.