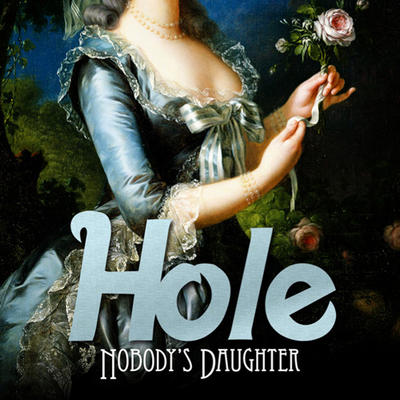 What happens when you take Courtney Love, new-found sobriety, Billy Corgan, and a band name that may or may not still hold some measure of weight today? You get Hole v2.0. We are not here to draw comparisons between Hole’s previous members and Love’s more recent musician selection. Courtney Love has already exclaimed that, first and foremost, this is her and her guitar — so how does that stand up to the Hole moniker and the new album, Nobody’s Daughter?

Love’s recent blogger/Twitter infamy and a fresh turn at being drug-free has ostensibly wiped the slate clean in her head, one fell swoop to eradicate some long-since-worldly-familiar cobwebs by putting them down on paper in ink. From beginning to end, Nobody’s Daughter is probably the most sincere thing the public has been given by Love since the days of Live Through This.

Throw in some influence from fellow ’90s icon Billy Corgan and a proportionate amount of production sheen from Celebrity Skin‘s Michael Beinhorn, Nobody’s Daughter is Love’s Hole: an entity that belongs to Love as much as it did to anyone else ever involved, fans included. Hole is the medium Love utilizes to convey her more personal side to a wider audience, the equivalent of how much easier it is to spill your guts to a stranger as opposed to a family member. No bias, just anonymity and merit.

Everything on Nobody’s Daughter screams retro, but these are not your dainty table scraps or seemingly random leftovers from a decade long gone. The songs stick in your head, the mood strips itself bare, and the term heavy applies to even the softest of inclusions. The vitriolic “Skinny Little Bitch” is a dose of early Hole work sonically, and reminds the crowd why Love and Hole are so respected still in certain circles; “Pacific Coast Highway” waxes poetic in appropriately bleak tones regarding Love’s late husband Kurt Cobain and the anger his suicide left on her shoulders, finally bringing Love’s true feelings on the matter plaintively to the forefront:

I’m overwhelmed and undersexed?
Baby what did you expect?
I’m overwrought and so disgraced
I’m too ashamed to show my face

Moving past singles, the majority of Nobody’s Daughter comes across like a series of diary entries and doll parts that present various scenarios about self-mutilation in the emotional sense: “Someone Else’s Bed” reminds us of those drug-addled morning after moments; “For Once In Your Life”, in a different manner from “Skinny Little Bitch” or “Loser Dust”, showcases Hole as the band in unison, crafting something of a lullaby chastising one for not living up to their full potential; “Letter To God” is a very blues-tinted Dylan moment, but does not overshadow the ’90s flavor that blends well with the surrounding songs.

All in all, the running themes that anyone expects from Love, Hole, or anything similar are rarely disappointed. While tracks like “Samantha” lost a little personality transferred from live and into the studio’s double-track production, the entirety of Nobody’s Daughter (if done properly) will translate nicely as the more personable set piece amongst a Hole set list full on “Celebrity Skin” and “Jennifer’s Body” revisits during the current (and sadly short) promotional tour. If only Auf Der Maur had come back, though…ah the memories.

For all who wish to tackle the obvious, we will dispense with the bullshit: this incarnation of Hole holds Courtney Love as the only current original member still present. One could argue that, due to such a drastic line-up cleansing, Nobody’s Daughter is more accurately a Love solo album along the lines of America’s Sweetheart (something former member Eric Erlandson would be adamant to have you believe). In the loosest sense, Nobody’s Daughter is a Courtney Love record with a Hole brand stamped on it to whatever end was intended, but outside of sorely missed Melissa Auf Der Maur, no longer donating her bass strings or contributing some stellar harmonies to the picture, casual listeners would be none the wiser.

Nobody’s Daughter has elements from ’90s punk and grunge (“Loser Dust”, “Skinny Little Bitch”), shoegaze (“Nobody’s Daughter”), and culls inspiration from the likes of Jack Off Jill or L7, while drawing a lot of focus on acoustic guitar and alternative rock during the majority of its track list. There is absolutely no reason to think that this latest Hole creation is not worthy of the name or its respective catalog.

Hey ’90s kids, your favorite crazy blond is back to basics.