The Black Lips to release new album this summer 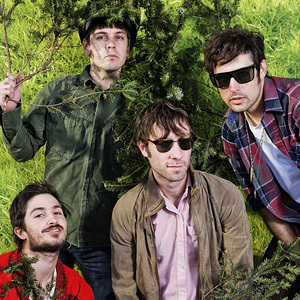 Atlanta’s unique flower punk band The Black Lips is currently prepping their fifth studio album, which guitarist Ian Saint Pe claims might be released by the end of summer. With two recording sessions out of the way, the band is full on its way to another spectacular record, one described by Saint Pe as including a mix of “garage stuff, punk stuff, and a little of that Atlanta hip-hop”. Wow. Plus, they’re considering embarking on another tour later this fall in support of the new released (assuming it remains on schedule).

As Billboard reports, the band has thus far held one session “a little more fine-tuned” session at it studio in Decatur, GA and another one featuring both Bradford Cox and Lockett Pundt (Deerhunter) as its producers. According to Saint Pe, “They’ve been focused sessions. I’m already digging what we’ve got. I’ve read reviews where people say we haven’t changed, but, man, the wheel ain’t broke, don’t fix it. We do what we do. It’ll sound like a Black Lips record; I can’t say much more than that. It’s just who we are. I think it sounds good.”

Another session is currently being scheduled at the Distillery in Costa Mesa, CA (where they recorded 2005’s Let It Bloom), but as of right now the album’s title and official release date have yet to be determined. “When will we be done? I’m hoping by June. I’m hoping we can get the record out by the end of summer, September-October, when school gets back in. That’s my prediction,” Pe went on to note.

In other Black Lips news, the flower punks are still touring the U.S. and have recently booked two shows in Spain along with an appearance at the Azkena Rock Festival in Vitoria. And if you’re lucky enough to catch them you just might hear a new song title “Raw Meat” that’s “like a punk song, and the hook’s a whistle.” Or, you could just check it out below!

Pe has also revealed a few more potential song titles, including “So Lone to Carolina”, “Wildest Dreams”, and “This is My World”, along with the possibility for adding some more European dates. So yeah, pretty exciting stuff.