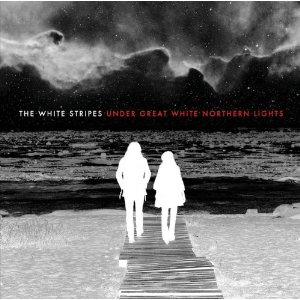 Be jealous of Canadians.

During a 2007 tour, The White Stripes made it a point to play every province in Canada. They filmed it, slapped on the title Under Great White Northern Lights, and it’s a film you should probably see. The corresponding live album, though, will be people’s first taste of that magical journey. And for a band with a lot of energy, it’s remarkable they’ve gone this long without a live album. But now that they have, everything feels like it’s closer to the way it was originally spawned inside Jack White’s head. Each track is darker and deeper and more bluesy and eccentric and haggard and just as beautifully catchy.

The key to a great live album is the layout of the tracks. Do they cover enough of their back catalog, or are there enough hits? For their live album debut, the siblings White have made an impressive tracklist, one that hits each of their albums and is full of  crowd pleasers and obscurities. And while the second half of the album is hit heavy (“Seven Nation Army”, “Fell In Love With A Girl”), this album demands to be played; each song stands alone but hints at something more to be explored and felt, forcing the listener to play on.

“Let’s Shake Hands” is even more wild and unpredictable than when it appeared on a seven-inch years ago. It’s a beauty of an opener, all energy and distortion that drowns out a newly awoken crowd. “Icky Thump” has that really organized synthesizer sound that just comes off as real pristine. Live, it’s jagged and hectic like a wild beast being tamed on stage. It ‘s also a great example of White having fun with the crowd, twisting and teasing them with the ending guitar line, keeping them happily under his thumb. “The Union Forever” is a song that should not exist unless played live. Its manic and demented lyrical content, combined with White’s singing that breaks down into a heretical rant, is something that rocks a body while scaring and confusing a whole stadium of people.

While the first half of the record is all about shattering bones, the second half has its highlights, albeit in a more subtle way. “Jolene” stands as kind of a mid-point in the story of the album: The first eight or so tracks are all spitfire, and the Dolly Parton original creates an atmosphere of raw emotion and a communal intimacy. “300 M.P.H. Torrential Outpour Blues” is a brilliant choice for a follow-up. It’s sweet and lounge-y in parts before kicking off into absurd levels of noise to the cheers of “thank you” from a crowd that doesn’t even know what’s left to come. And you’re right there with them.

Of course, no White Stripes effort is complete without a rip-roaring finale. “Seven Nation Army” could be the phenomenal ending to any of their shows. It thumps extra hard, sinisterly whipping the crowd into a pure, ecstatic chaos. But that’s not the finish. “End” is a blur of computerized dance noise that shifts right into the album opening bagpipe once more. It’s a firm reminder to expect the noisy and unconventional in everything White Stripes.