Terror Pigeon Dance Revolt – Have the Best Day of Your Life 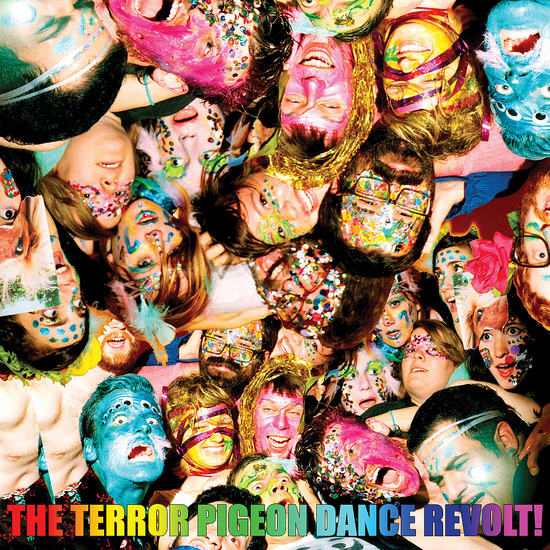 Neil Fridd has a lot to say, or yell rather, about love, but Terror Pigeon Dance Revolt’s not just the usual crying about broken hearts. It’s more of an open ended invitation to his own thoughts about the topic and how it’s been treating him so far. These ironic, sarcastic, and inspiring words clawing to get out are what caused him to start the band in the first place a few years ago, and the resulting record is the explosion of emotion that’s handled in the rowdiest way possible, through sloppy group indie- pop. They weren’t messing around when they called it Have the Best Day of Your Life!

Endlessly building opener “Snake Bites” lets you know every step of the way that everything’s going to be all right as the notes buzz and the drums drive.  The advice is given more like a conversation with a friend, but that’s just Fridd’s writing style, transparent, blunt, and all too adorable. Just as he professes his like for you, he takes the next track to tell you he’s sorry for being a jerk with a little light punk tone to help him out. The record goes back and forth between cute and innocent love and out right expletive filled hate, but for the most part it’s all about keeping your head up no matter what, and you can’t say no to a message like that.

To help him out, Fridd enlisted a slew of musicians to join him in yelling out his words and add a touch of irresistibly catchy basement rock to back it all up. There’s a strong feeling of revelry here with mass sing-a-longs bursting out on every track. Lo-tech keys with scatter brained percussion keep the energy at its fullest never nearing a lull even when going down tempo. “Lotdwykirthbr” breaks out the saxophone for another layer to stir up a frenzy, and “Fast Forward Regrets” swirls the synths around as Fridd takes things in a slightly darker direction, and unfortunately it’s short lived.

Throughout the ups and downs, Have the Best Day in an amazingly positive record with lines like “We’re gunna make it through all the shit, every fucking day, every fucking way” from “In Your Face Sickness” taking the prize for most uplifting line, and song for that matter, of the album. That kind of youthful optimism pulls on your inner child and romantic at the same time. “Snow Day” beckons that child to come out and play, and then asks you to believe in life on the last track “Ride Friendship” as they chant “We’re alive, we’re in love, we’ve got hope just because”. These short quips are how they get their message out, by sticking to a couple of lines and putting all the power behind ever word.

Striking a TV on the Radio like note, “My Favorite Hair” breaks out the new wave soul with a heavier beat, and when the horns kick in, the energy peaks again. It’s the longest track offered, and easily one of the best. Songs like this make it hard to peg Terror Pigeon down on any one style as they move across the boards of neo-this and post-that. Really, it’s a basement dance record that requires ample amounts of confetti, balloons, and some friends to jump around with.

With so much in your face vigor, the 10 tracks seem to fly by, and at the end, it’s hard not to turn back the record and start it over again. It’s just so easy to get caught up in the moment, showing you what good music is supposed to do by providing an escape. The low production value and one take fits all attitude only adds to the smiling charm that Fridd carries with him. I’ve never been good at picking out feel good cards, especially for someone who’s stuck in a rut, but next time I think I’ll skip Hallmark and send them this record.