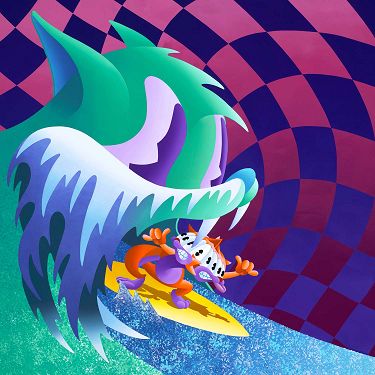 The boys behind MGMT want to tell you something. It’s short and to the point. That message? Thanks for listening, but fuck you. For those who fell in love with the Connecticut melody makers through club-friendly hits like “Kids”, “Time to Pretend”, or “Electric Feel”, you can exit out the left and grab a mint on your way. It’s been a short ride, they hope you enjoyed it. For those of you left, the seven or 12 elated fans who found solace in the second half of 2007’s Oracular Spectacular — starting with “4th Dimensional Transition”  and ending in “Future Reflections” — Congratulations should come off as a gift. It’s nice feeling so exclusive, huh?

Yes,Andrew VanWyngarden and Ben Martin Goldwasser weren’t lying. You won’t find one single on Congratulations. There just isn’t one. “Brian Eno” is a spunky ’60s beach wallop, but it won’t satisfy radio listeners, “Flash Delirium” already induced vomiting online, so it’s safe to say that one’s out, and the titular track is as slow as molasses. By now, it’s obvious that the group’s sophomore effort doesn’t follow Oracular Spectacular so much as it stomps it to the ground, kicks it in the head, forces it to bite the curb, and stomps repeatedly as if it’s Ed Norton a la American History X on speed.

That doesn’t mean it’s necessarily bad. The album provides some alternative melody, even if it’s mostly forgettable. “Flash Delirium” is a good example of this. It’s the sonic equivalent of five musicians standing in a room and arguing what to play, resulting in one disheveled nod to late ’60’s psychedelia with bits that seem stripped from episodes of Sesame Street (e.g. the stupid sing-a-long bridge and horrendous flute solo). It’s ridiculous, it’s almost perverse, but there’s something comical about it — even if most fans won’t be laughing.

Some songs hit their targets. “It’s Working” could have easily wedged itself in the latter half of the group’s 2007 debut. The acid charmer bridges a variety of instrumentals together, while VanWyngarden’s vocals tip-toe on waves of eclectic tribal drumming and paranoid organs. It’s sort of Polyphonic Spree-meets-Velvet Underground, come to think of it. Then there’s “Song For Dan Treacy”, arguably the strongest of the nine, that punches and pulls with head bopping rhythm (no doubt borrowed from Bobby “Boris” Pickett) that begs you to dance “The Swim”. It’s sort of dusty and feels more like a throwback tune, but then, so does the rest of the record. The vague and albeit unnecessary “Lady Dada’s Nightmare” sounds stripped from The Doors’ third effort, 1968’s Waiting for the Sun, with the interplay between some spiral piano work and haunting, jagged guitar solos. They don’t particularly leave this sound, either.  “Someone’s Missing” shifts up north to Jefferson Airplane (think “Embryonic Journey”), working with that exploratory mood that feels eerily claustrophobic, only it all ends like an old Jackson 5 hit. Weird, right?

That about sums up Congratulations: weird. It’s an oddball follow-up and probably not the one they should have made… at least not yet. For two reasons, actually. One, the band hasn’t sharpened the sound yet. When the psychedelic stuff works, it’s great, but it’s rare that it feels justified. A song like the 12-minute opus “Siberian Breaks” sounds right — especially following the melancholy “I Found a Whistle” — but it builds and climbs (and builds and climbs again), only to lead us nowhere. Well, that’s not true. It drops us off with “Brian Eno”, a song that may feel sharp musically, but lyrically, it’s the most asinine track since Lil’ Wayne’s “Lollipop”, coming off less like an homage and more like an attempt to bag the producer for their next effort. But that’s hardly an issue. The real problem here is that the band can’t decide if it wants to bop ‘n’ roll or rock ‘n’ curl. (Like that wordplay there?) It’s “take a hit of this” one minute and “surf’s up” the next. That gets fucking tiring. Now, VanWyngarden and Goldwasser have gone on record insisting that this record needs to be consumed as a whole, which explains the lack of singles, but altogether it feels confused and far from realized.

This leads to the second reason they shouldn’t have made this record yet. They haven’t earned it. They’ve only put out a single album and they’re notorious for one reason: They grasped the world with three scorching hot singles that sizzle on the radio even three years later. To go off and create some oddball album not only comes off as downright pretentious, but unwarranted. They’ve yet to discover who they are, what their sound is, and what they really represent. Now they’re at a standstill. It’s almost an existential dilemma, really. Are they a band to play hits? Or are they a psychedelic band? Will they ever write another single? Or do they want to opt for album-only listens? Do they want to make people dance? Do we call them M-G-M-T or say “Management”? Do they mind that 75% of their fanbase might hit the road? Lots of questions, no clear cut answers. Here’s one important question though, and answer it after you’ve finished Congratulations: “Would you even listen to this record if it wasn’t by MGMT?”

I’ll leave you with that.