Drink Up Buttercup – Born and Thrown on a Hook 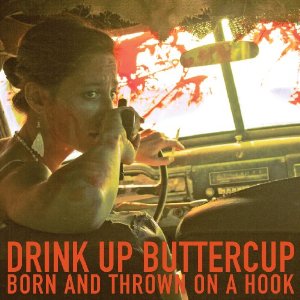 What a great band does is take their influences and blends and tweaks them until they have a sound that is vaguely familiar while being fresh and inventive. Not to say they don’t have the potential to be truly great eventually, but Drink Up Buttercup like to do things a little differently. The Philadelphia band have taken their influences — often tiny, obscure fragments of them — and mashed them up with hectic bits of noise for an interesting album that hits the mark and, well, just makes a lot of racket.

One surefire way to please most fans is to turn to the idol of The Beatles, which the band does with varying degrees of success. There’s the near-album opening “Young Ladies”, which starts like a fusion of a Lennon piano ballad with the awkward grace of Ringo’s vocals before exploding into a Sgt. Pepper’s-esque explosion of pure pop majesty. “Lovers Play Dead” is another glorious adaptation of the Fab Four sound, a strummy pop number that takes a concept so creepy it has to be heard and pumps it up with so much catchiness and sing-along-ability that the morose swells with giddy joy. But songs like “Pink Sunshine”, with its grating and often irritating falsetto, show that even the tiniest of missteps in musical decisions can ruin what could be quaint fun.

But arguably one of the band’s biggest loves is the aforementioned high levels of sonic output. When applied to their love of the Liverpudlians, we get “Mr Pie Eyes”, an explosion of other worldly pop freak-outs that ruin the charm and appeal of the simplistically structured pop tune. But even that monster is a rarity, with the dirty jam of “Heavy Hand” and the bubbling Beach Boys number “Gods and Gentlemen” being way more commonplace.

Pop songs and pure noise aside, the group is vastly skilled at creating a feel. But when one looks at individual songs, not all of them come off as bright and catchy under the weight of their hectic instrument banging. They’re fans of the organ and use it along with lots of drums and guitar playing to create a feel that is like a turn of the century Victorian circus with plenty of barkers that sing mechanized rhythms to throngs of frightened on-lookers. Despite an obscure and rather artsy descriptions, there is no definitive song where the whole concept is truly abundant or overpowering; it’s a gradual, nagging presence across an album and one that swells in certain sections and dies out under kickin’ jams or pop delights in others. Add on to that a distinctively ’60s framework, which for all intents and purposes is a fondness for sharp, concise songwriting, with a tendency for all things psychedelic, and you’ve got a beast of an album that pulls in a lot of directions without seemingly favoring any path.

It’s important to properly digest any album; this one particular is going to take some effort. But even if you’re looking for an immediate preliminary connection, you won’t find that. Instead, it’s going to take a few spins to tear away the layers and appreciate the effort in any meager way. But if you want the work to get to the distorted pop center, then drink up indeed.