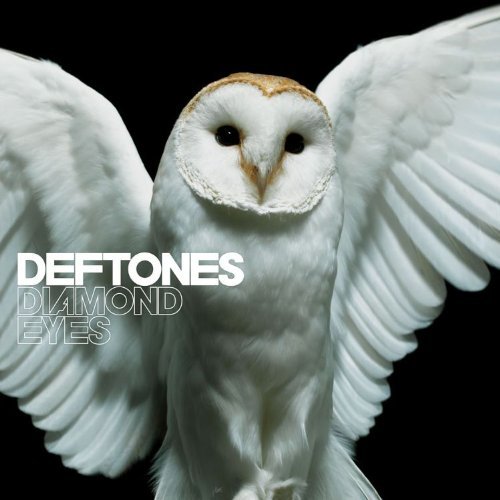 Due to a tragic accident, Deftones band member Chi Cheng was hospitalized and currently remains in a minimally conscious state. This very fact has probably altered a Deftones musical tangent in one fell swoop, possibly for the better, and in more profound ways united a fan base beyond borders. Tragedy has a way of bringing people back to basics, though in dire circumstances it also precedes band break-ups (Led Zeppelin being one example) or depression. But thankfully, the Deftones did the honorable thing for their fallen comrade and rebooted with fresh perspectives. Thus, we arrive at Diamond Eyes.

To explain further: Deftones were in the process of recording a follow-up to 2006’s Saturday Night Wrist, an album heavily influenced by trip-hop via leader Chino Moreno’s as-of-late-stagnant side project Team Sleep (unfortunately trading out a lot of pre-“Minerva” respects). This new album was originally to be titled Eros, but after bassist Cheng entered his coma, plans were uprooted for obvious reasons. Previous recordings were put on hold in favor of “Rocket Skates” and the aforementioned Diamond Eyes. As the record title indicates, the intent here was witnessing beauty and celebrating life, and in the wake of Cheng’s fallen status such a message becomes all the more poignant. While band members have stated that pushing back the release of Eros (which will hopefully see the light of day, given its supposedly more-aggressive nature) has nothing to do with Chi Cheng’s current condition, we wish for the best on both counts.

Diamond Eyes is a bonafide return with gusto and some newer, more positively charged fringes attached, production courtesy of award-winning (though seemingly undervalued) Nick Raskulinecz. Moving past the very Around The Fur-era “Rocket Skates”, Raskulinecz helped button songs like “CMND/CTRL” and “You’ve Seen the Butcher” in almost Romanek instances of smoke-screen theatrics, a lethal combination of typical unique Moreno vocals and static air surrounding the moods, only accented by background atmospherics from our Team Sleep/Deftones arenas. Diamond Eyes also pulls off tangible airplay rock that does not come off preset or cookie cutter; the invigorating ”Beauty School” is a definite single, but while it is extremely radio-esque the theme does not seem sarcastic or retrospective, given that its corresponding album is all about beauty — instead of coming off as a dark commentary on metamorphosis a la “Change”, “Beauty School” feels like a true love song in tone that can be highly respected on all fronts.

The most noticeable trait of Diamond Eyes has to be its entire arrangement in general. Plotted out much like the blueprint to grief and resurfacing, Diamond Eyes treks between Deftones’ best characteristics: the abrasive coping mechanisms of “Royal”, “CMND/CTRL”, and the very-much-“Root” sonic revisit in “Risk” (advising people to actually step outside themselves for a while, see the bright side); the somber reflections of “Prince”; the welcoming of altered space fabrics in “You’ve Seen the Butcher”, “Beauty School”, and “Sextape”.

Diamond Eyes takes all that one loves about the Deftones (current temporary bassist fill-in notwithstanding) and places it formally onto the dining-room table like a neatly arranged set of silverware, turns out the lights, and invites the senses to run blind through the third eye we call musical perception — to taste the sounds and reap the benefits. From Diamond Eyes‘ opening titular track to the finale of “This Place Is Death”, from temple to sternum and back, Diamond Eyes is visceral and electrifying in the way only Deftones can be, given current replacement-bassist Sergio Vega’s penchant for complementing the fold so well.

If you were to witness this band’s starting point, you would have to wonder how they took something that theoretically never should have sounded that great to the ears and flipped it into an act that takes its “art” defiantly seriously. Deftones never should have been as big as they were, but timing appears to be everything post-White Pony, and even if your only true dive into Deftones wound up being that very album, you cannot deny the remarkable aesthetics delicately carved into every outing before or since (even if Saturday Night Wrist sounded pretentious as hell). Diamond Eyes might very well say it best — this place is death — but on that same note, this place is also life that both giveth and taketh away, so never lose sight of your dreams in the haze of stardom or lonesome alike. This is a true testament to that.