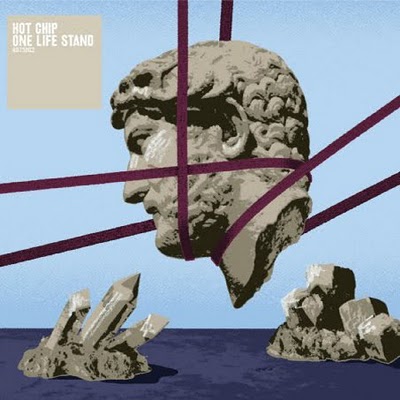 Between Hot Chip‘s first and second albums, the band decided to explore its darker side and somehow make even catchier songs. Then on the third album, the group took the same approach but tightened its songwriting. As a result, 2008’s Made in the Dark was one of the year’s more compelling albums. One moment you were listening to a perfectly crafted pop track like “Ready for the Floor”, and a few minutes later, you were ready to weep with the somber “In the Privacy of Our Love”. Over the course of 13 tracks, you went from maniacal dance party to intimate love affair. Heavy stuff.

On One Life Stand, the band’s fourth LP, they stay close to the party without getting lost in the beats. Even in its most rhythmic moments, Hot Chip might have one foot on the dance floor but it also keeps one hand writing love letters. One Life Stand isn’t the bold stylistic leap some fans might have been expecting, especially given the band’s pre-release interviews promising a more somber album, but it’s still proof that the band is pushing itself to be better songwriters and musicians. It also proves that the electropop label they’ve been saddled with isn’t entirely inaccurate, but it’s far too narrow to describe what’s being accomplished here.

As with the previous two Hot Chip releases, One Life Stand opens with a slowly building synth that’s broken by intense drumming. What starts off as a Styx homage becomes a fist-pounder in a matter of seconds. The opener, “Thieves in the Night”, tells you what you’re getting for the next 50 minutes: a jam that’s not as happy as it seems. Vocalist Alexis Taylor can’t help but sound like a heartbroken sap every time he opens his mouth. His high vocals border on whiny, but he adeptly reins them in so that you hear heartfelt emotion in every track. As a result, even a track like “We Have Love”, which borrows heavily from early European techno of yore, is more personable than you’d expect from a song that has a beat not too far removed from Mr. Oizo. The band is as known for its humor as it is for its rhythms, so the blend of well-worn electronica for a love song is what Hot Chip fans have come to expect. In some ways, hearing this unlikely mash-up feels like hanging out an old friend…an old, fun, peculiar friend.

The title track and album’s first single finds Taylor front and center, with puppy-dog eyes and his heart on his sleeve. He implores, “I only want to be your one life stand /(Could this be? Could this be?) /Tell me do you stand by your man?” Although the song lacks the frantic rhythm of Made in the Dark‘s “Shake a Fist”, it’s still a viable dance song. But just before each chorus, the music pulls back and a somber synth hovers for a few beats to remind you that the song is more than just a foot tapper. “Hand Me Down Your Love” strikes the same chord, although the piano chords and percussion evoke more soul than they do discotheque. In fact, fellow Brit Jamie Lidell would be right at home crooning on this track.

Marimba and string samples drive “I Feel Better”, a tune that is as icy as it is romantic. The song’s vocals rely both on Taylor’s lovelorn high notes and the delightfully dated Auto-Tune. This clash of technology and natural sounds converge on the lyrics: “There is a day that is yours for embracing/everything’s nothing, nothing is ours.” The track is pure Hot Chip pop, but it owes a decent amount to house music with its ability to be mellow and rhythmic all at once.

The album has mood shifts, and along the way you get low-key 2008 tour staple “Alley Cats”, but it wisely brings you back to the start. The band could have once again ended on the soft, sweet note as it previously has- and in some ways it does here, too- but this time the finale would have made a strong opener, too. “Take It In” is all about layers: layered percussion, layered vocals, layered samples. The twist is that the samples aren’t competing against each other; they’re reinforcing each other. Consequently, the song sounds simpler than it is. Turn it up and you’ll hear a dozen sounds coming at you at once, but you’ll always keep going back to the words. “Oh, my heart has flown to you just like a dove/It can fly, it can fly/Oh, please take my heart and keep it close to you/Take it in, take it in” could be the sappiest lyrics we hear in 2010, but nobody cares. Nor should we. “Take It In” is as good as anything Hot Chip has done, and that’s no easy task to accomplish in a catalog as impressive as theirs.

In fact, I suspect we’re hearing some of the year’s best crafted songs. Obviously, it’s too early to tell if the album is going to be one of the year’s best- after all, it’s already been an impressive year. But you can be certain that few acts can juggle accessible pop and emotion as well as Hot Chip. In its weakest moments, One Life Stand is just good, and in its strongest moments, it’s stunning. Judging by the progression over these four albums, Hot Chip is on an upward trajectory that is worth following.