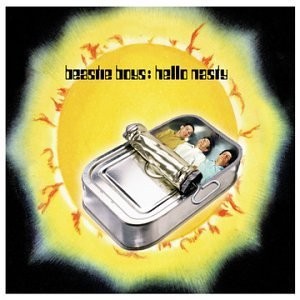 The fifth studio album by the coolest pack of rapping white boys around has been picked up, polished off, and re-released along with a superb collection of b-sides and previously unreleased tracks. Hello Nasty was the first Beastie Boys album to include the participation of DJ Mix Master Mike, and it holds a number of ‘90s classics, among them “Body Movin’”, “Intergalactic” and of course, “Three MC’s and One DJ”, which features the introduction of the Mix Master.

On the 2009 remastered edition, the strong beats and wacky rhymes are clearer than ever, and every contributing sound is highlighted masterfully. The initial “Super Disco Breakin’” is still the perfect breakin’ to begin a Beasties jam, swinging you slowly into a caffeine-fueled rhyme explosion. “Remote Control” has still got that slow drum beat blanketed with a timeless riff, and the “Song For The Man” follows with reverberating vocals allusive to Fatboy Slim (who incidentally remixes a track on the bonus disc).

When the robotic vox of “Intergalactic” kicked in after “Body Movin’”, I still felt a tickling at the nape of my neck, just like I did 11 years ago. On instrumental tracks like “Sneakin’ Out The Hospital” and “Song For Junior”, the sort-of-Eastern, sort-of-Latin accoutrements the Beasties are so skilled at arranging sound crisp as morning toast; and every underlying hint of strings is so well strummed beneath the cymbals and crashes. After about a half hour of “non-stop hip-hop”, MCA croons in with “I Don’t Know”, accompanied by Japanese vocalist Miho Hatori of Cibo Matto. This track is a window to the beloved MC’s soft side, and given his current health situation, it’s touching to hear his vocals sway over a sweet acoustic melody.

But although every track on the remastered album sounds booming and as electrifying as it did on the 1998 release, the real treat is on the bonus disc of rarities. It begins with some homeboys talking and some odd sounds on “Description Of A Strange Man”, and continues with 20 more tracks of remixes, tiny jams, and the eastern groovy that the Beasties like to keep around. Scattered throughout, you’ll find bits and pieces of popular songs off Hello Nasty, and some tracks that sound like they would do real well accompanying Ron Jeremy in his endeavors.

The remixes on this one are really sublime. Some get a little slower, like “Puttin’ Shame In Your Game”, which is an excellent adaptation of Beastie Boy hip-hop to a more contemporary style. “Body Movin’” shows up twice, masterfully remixed each time—once by Fatboy Slim and again by Kut Masta Kurt. “Intergalactic” sounds more like a superstar track, also getting down with the 2000s a bit. Though “Learning Remote Control” is not exactly a remix, it’s a nice little jam along to the song’s riff.

The rarities CD is really just a wacky party of Beastie nature, and it’s got anything from a really soulful dub mix of “Dr. Lee, PhD” to short trippy bongo jams like in “Auntie Jackie Poom Poom Delicious”, to “Hail Sagan”, which in an alternate universe could be the soundtrack to Jeff Goldblum’s 1986 metamorphosis (The Fly, kids). What makes it a more personal album is the couple of tracks where the Boys are just talking, and in the end just declaring how incredible their record is. Gotta love those Beasties.