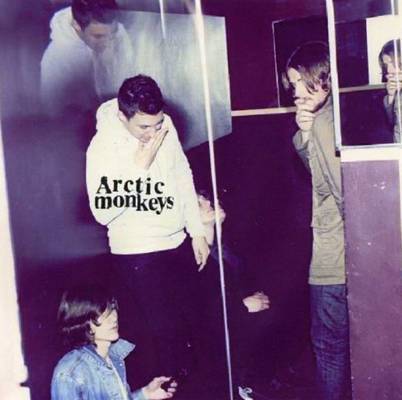 The Goddesses of hype and fanfare have been smitten with the Arctic Monkeys since their debut album, Whatever People Say that I Am, That’s What I’m Not, became the fastest selling British debut in history. The album, a frenzied postcard from the pubs and dance floors of England, thrust the band into the proverbial spotlight and tagged them as the next big thing. Although hype can be a hard thing to live up to, they were anything but one hit wonders, and the love affair continued with their sparkling sophomore effort, Favourite Worst Nightmare.

The hype machine has drowned more than one promising career, but the band’s latest album, Humbug, proves that not only are the Arctic Monkeys treading water, they’re almost walking on it. The album is an exhilarating snapshot of a more mature, confident band, willing to take risks and not hit cruise control on the often fickle road to long-term success. It’s darker, it’s moodier, and its charm becomes more apparent with each subsequent listen.

Joshua Homme of Queens of the Stone Age co-produced the album with James Ford, who worked with lead vocalist/ songwriter, Alex Turner on the side project, The Last Shadow Puppets. The production is crisp, without being too slick, retaining enough of a raw edge to keep its classic rock n’ roll spirit intact.

Brooding with a retro swagger, Humbug is a bewitching stroll through the aisles of a vintage record shop, where the magic lies in the discovery. With song titles such as “Potion Approaching” and “Secret Door”, the album does have an almost mystical vibe, accented by Turner’s brilliant lyrics and Matt Helders impressive drumming. The melodies chug along at a carefree pace, often changing tempo and direction (and sometimes getting lost along the way), much like the spaced-out jam-fests of the sixties and seventies. They may not always be perfect, but they’re never boring.

The first single, “Crying Lightning”, is psychedelic poetry from another era, and the perfect introduction to the new sound. Strung out on Jim Morrison-like vocals and funky guitar riffs, it slowly eases into a raucous, shout out finale. Other songs, such as the sexually charged opener, “My Propeller”, and “Dance Little Liar” follow the same mid-tempo path to success. The pace slows even more on the whimsical and bouncy “Secret Door” and the best song on the album, “Cornerstone”, which brilliantly wanders through a night of pub hopping and lost love.

Fans hoping to hear more of the Whatever People Say that I am sound will love “Pretty Visitors”. Gothic keyboards introduce a kinetic whirlwind of screaming guitars and wailing vocals before freefalling into a chorus that wouldn’t sound out of place on an early Black Sabbath record. It also features a line that will surely be one of the most memorable of the year: “Which came first – the chicken or the dickhead”. The album’s closing track, “The Jeweller’s Hand”, treads into surreal Pink Floyd territory with a carnival atmosphere that somehow seems like the perfect conclusion.

Although some long time fans may be disappointed with the new direction, Humbug is undoubtedly the Arctic Monkeys best album and a legitimate contender for album of the year. Some of those same fans may even be surprised to find out which album is dominating their playlists in a couple of months. The band’s earlier releases were fun and energetic, but Humbug is like Greta Garbo in Grand Hotel.