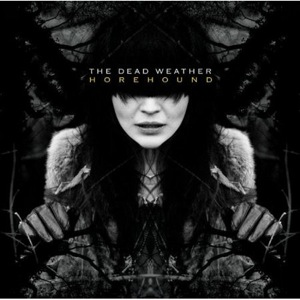 You’d have to have spent the last 10 years living under a rock to be unaware of the shadow Jack White casts on Alternative rock. His maestro-of-all-things attack on guitar-rock has sent youths back into their garages in pursuit of the amplified chaos each of his previous bands have concocted using both shock and the therapy required to recover from it. He’s not the sort of man who would take the back seat. To anyone. His latest band, The Dead Weather, is comprised of hard-rock journeypersons who decided it would be best to combine their go-forward-by-going-back interpretation rock and roll’s undeniable power.

“60 Feet Tall”, the album’s best song, sounds like it would fit in on a 1967 radio playlist. The song itself is all ambiance. A setting of heartbeat-inducing shrills induced by Mosshart and White’s spooky demanding lyrical odes to the vibrancy of longing and honesty of love’s stranglehold. A fuzzed out interlude of spraypainted guitar licks turns the tune into an act of sonic graffiti rather than a pop song. This is a good thing, especially for those who’ve grown weary of The White Stripes’ verse-chorus-verse template, or The Raconteurs’ Deep Purple-meets-The Stooges-meets-The Black Crowes howl.

“3 Birds” sounds like something James Bond may have on his iPod. It’s a danceable ode to intrigue that oozes along under the power of a very retro, but quite cool bass line, an intermittent splash of raindrop keys and an eventual shift into a drum roll induced high speed chase. This could easily be pegged as the theme song to Hollywood’s next spy-thriller franchise. It should be.

This is an album that relies heavily on the ability of its singers who treat everyday like Halloween. White stifles his chipmunk-soprano and provides a deeper, throatier vocal interpretation that adds a necessary backbone to Mosshart’s recognizably nasal speak/sing delivery. Her ardor for sleaze and the lure of eyeliner-infused mystique fit perfectly over White’s you-look-away-first bravado. Their unification gives Horehound its voice, and refuses to allow any listeners to ignore their sentiments.

“Will There Be Enough Water” provides a terrifically great escape into the darkness we hide in our hearts (“Just because you caught me/Doesn’t make it a sin”). On the track, White and Mosshart seem to sing around each other, rather than together, and the ominous piano arrangements signify the band has exhausted its muse. They are now merely exhaling what’s left of their energy. It’s nice. The album’s previous tracks tend to batter rather than soothe. While this works on “So Far From Your Weapon” and “New Pony”, it tends to extinguish the albums overall flare. You can only hit someone hard enough before they fall over. This is when lullabies work best.

“Treat Me Like Your Mother” provides the record’s oddest sentiment. The title insinuates enough, and the largely indecipherable lyrics seem to be presented with the intention of confusing the listener further. Would a young woman actually request such a thing? Allow this stomp-the-fly-to-death tune to help you forget how often you’d cringe had your girlfriend actually inquired something like this.

Horehound is an album that leaves an imprint of echo driven sentiment. The lyrics, however, paint a rather honest picture of how fragile hearts can conjure up telling depictions on how love can soar, and fade — almost simultaneously. On opening track “60 Feet Tall”, Mosshart sings, “You’re so cruel and shameless/But I can’t leave you be/You’ve got the kinda lovin’/I need constantly,” and continues this theme on “Hang You From The Heavens”, where she adds, “I’d like to grab you by the hair/And hang you up from the Heavens,” though she’s just as quick to bite, as is the case with “I Cut Like a Buffalo”, to which she sings with finality, “You know I love like a woman, but I cut like a buffalo.”

Those who dare to love are entitled to their own (even creepily unorthodox) interpretation of how to express it. The aforementioned lyrical smatterings are a testament to that, and likely the reason The Dead Weather rely on the originality of their sound, rather than their familiar discourse. But Horehound is just that: An enigmatic, original album that sounds as weird as its cast members would look sitting court side at a Bull’s game. It doesn’t always work, but when it does, look out.