Fucked Up – The Chemistry of Common Life 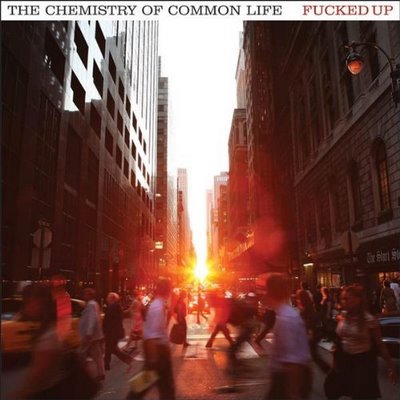 What happens when you mesh Billy Talent with Henry Rollins, Blur and Sex Pistols? First, you get chaos akin to Canadian hockey with rioting soccer fans… then you get Fucked Up (in more ways than one). This hardcore band from Toronto is not your typical group of polite Canadians, but one has to admire its straightforward, no bullshit band name.

2008 sees the release of Fucked Up’s second full-length album, The Chemistry of Common Life. After this group’s constant string of EPs, dedicated solely to vinyl due to the band’s disdain for CDs, one has to assume that this new album is a means to simply get noticed beyond its punk roots. That, or they decided to step up its game.

“Son of Father” begins this maniacal train ride, avoiding a complete train wreck immediately with brutal fuzz and triumphant vocals from Pink Eyes; it’s a fine opener, and well worth hearing. Next, there’s a dose of tribal snare drum and Rollins-style raving in “Magic Word”, which leads into the apocalyptic feeling of “Golden Seal.” This track actually resembles the landscape of the album cover – Manhattan skylines mixed with that lifeless world seen in films,  I Am Legend or 28 Days Later. It’s a soothing instrumental, but also haunting with something that mirrors Radiohead’s capacity in its distorted synth and MIDI mania. Coincidentally, the aftermath of the said track delivers us to, “Days of Last”, which is well-placed in both mood and title, despite its old-school Offspring influences (save for the vocals).

“Crooked Head” is again on Offspring bandwagon, only more so; sadly, a throwaway. “No Epiphany” is what would happen if Oasis started going punk, which is not that far from the truth considering Noel Galagher’s antics over the past few years. “Black Albino Bones” has everything punk and everything pop tossed into the grinder and spiked with cyanide, while “Royal Swan” harkens back to “Golden Seal” with lengthy synths and genre-bending crosshairs, aimed at the haters with vocals meant to terrify. Another fine instrumental gains headway with “Looking for God”, which most definitely feels sarcastic, as if Pink Eyes knows the search is a moot point and allows 10,000 marbles the crack at it (yes, that is a band member name). As we depart, we come to the all-important closer.

The longest track on this album (with “Son of Father” trailing at 6:33) is the final track which typically bodes well for an already excellent release. “The Chemisry of Common Life” isn’t what one normally compares to a closing track, with a relatively short introduction for what builds up to be an epic title track. However, the song itself is packed with such a namesake as we delve into garage band drums and power chords twisted into high-notes galore. Pink Eyes goes postal (think: Henry Rollins) as he has everywhere else on this release, but this time he feels much more passionate – as if this is his dying breath. This holds true even into the grandiose final sounds of “The Chemistry…”.

All in all, it’s great to hear a new punk album that holds its ground in the as-of-late decimated genre. Sure, we have our various examples of why punk is supposedly dead (part of the blame goes to TRL), amongst the reasons why rock and roll is being replaced by alternative in ways both good, bad, and ugly. Either way you flip the coin, Fucked Up remains on the side recognized by the fans of punk both old and new, while shunned by corporations for its constant reliance on vinyl or (most assuredly) its name.