TV on the Radio – Dear Science 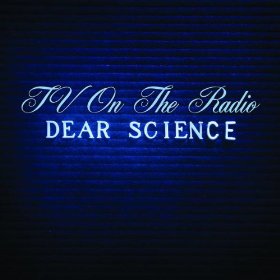 TV on the Radio must be listening to a lot of Prince. That may not sound like a completely shocking statement (both artists have always shared a similar love of genre-bending), but Dear Science, the Brooklyn art-rock quintet’s third full length, proves that this time around, they really took the party grooves of pop music’s most lovable freak to heart.

Fans of the morose need not worry. Lyrically speaking, TVOTR is in their traditional midnight form. The tracks overflow with inky soundscapes of desperate young dudes waging war against Orwellian political machines, and more commonly, bloodthirsty babes. Whether it be a woman’s violently overbearing family (“Family Tree”) her domineering attitude (“Love Dog”), or the monopolizing nature of the press (“Dancing Choose”), TVOTR know how to lash out in style.

Things kick off with “Halfway Home”, the band’s bounciest opener to date. With its handclaps, synthesized drums, and hip swinging chorus of “ba-ba-bu-bu-bums,” the track’s beat would sound right at home in Fast Times At Ridgemont High. What keeps it from melting into a watered down 80’s nostalgia trip is the dueling siren of frontman Tunde Adebimpe and his backing throat Kyp Malone. Always the Robin to Adebimpe’s Batman, Malone swoops in at all the right moments, adding a higher pitched, younger atmosphere to the mix. He’s a perfect (but not too polar) counterpart to Adebimpe’s otherworldly pipes. When combined, the vocalists are a satellite, able to observe the lush production of wiz kid/band-mate David Andrew Sitek without being too emotionally connected to it. “Halfway Home”, and virtually every other track on the album, sounds like eager, thrill-seeking extraterrestrials trying to have a good time on Earth, only to leave the party feeling wounded.

The tense celebration reaches a fever pitch on “Dancing Choose”, a maniacally paced indictment of a cold-hearted yuppie who simply regurgitates what he reads in the news. With its half-rapping verses and enough horns to blow down the walls of Jericho, you’ll forget you’re listening to the band verbally assault someone.

“Golden Age” carries a similar celebration speed, although in a less cynical fashion.  Lyrics like “here it comes like a natural disaster, all blowing up like a ghetto blaster…well there’s a golden age comin’ round,” make the song a rarity in the TVOTR catalogue: a sincere exaltation of being alive.  And thanks to its 70’s car chase guitar and Parliament worthy horn section, it actually works, sounding too cool to be hippie or New Age.

Things slow down with “Family Tree”, a gothic tale of a man not being accepted by his lover’s kin. What starts off as an age-old tale of star-crossed heartbreak, fleshed out by swirling strings and archaic piano, quickly grows more acidic as the chorus kicks in. Lyrics like, “In the shadow of the gallows of your family tree, there’s a hundred hearts or three pumping blood to the roots of evil to keep their young,” reveal the sinister intentions of the girl’s family, adding a sense of catastrophic yearning to the song. “Family Tree” is the band’s most emotionally involved cut; both a proclamation of forbidden attraction and a reminder of how truly frightening and dangerous being in love can be.

The fractured 80’s kaleidoscope begins to spin once more in the latter of half of the album.  Depeche Mode-esque tracks like “DLZ” bask in muddy synthesizers that bubble to intense climaxes with Adebimpe taking a stand against “the death professors” that make things “feel like the dawn of the loser forever.”  The totalitarian lament grows distant and spooky as the synthesizers and oil drum percussion melt into hollow whistling at the track’s end.

The band turns its attention to romance once again on closer “Lover’s Day”. Starting off as a grim yet anxious reflection on the chaotic nature of love, the song is eventually drowned in wooden soldier snare drum, tin whistles, clarinets, and a tambourine so far away it could be underwater, making the whole thing sound like it was recorded in a collapsing toy factory. Although uncertain and foreboding, the song still sounds fun as shit, rounding out an album that manages to rock in spite of itself. TV on the Radio may feel the urge to sing about dystopian futures and the romantic apocalypse, but damned if they don’t have a fun time doing it.