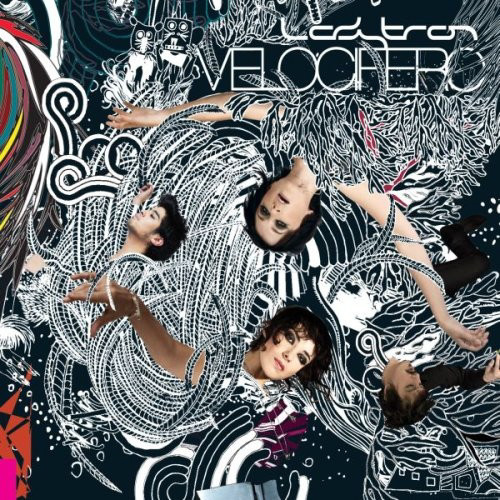 Independent music seems to be enjoying its love affair with 80s revival, and Ladytron has been at it since 2001. Their latest, Velocifero, is certainly no exception, and can even be heard more so now. Having recorded the new record in France, that would actually make sense being that France, and the rest of Europe love electronica in all it’s forms, especially since it would sound great next to a Depeche Mode, or New Order record. Ladytron has really honed in on this style over the last seven years, making sure not to over due it, and with this latest venture, they walked right up to that limit, careful not to step over into being cliché.

I was a little surprised (but not disappointed) when I read where this album was recorded, mainly because I thought there would have been a bit more of that France’s house music influence, one of their more recent successful exports as of late. But what does make it through actually helps the music, really solidifying the sound as something that can be enjoyed. The drums and bass feel a little heavier this time around, with added guitar emphasis on some tracks such as “The Lovers”, and the very stripped down “Versus,” the only track with no electronic drum beats or heavy synthesizers. This is a very different track for the band, being that it utilizes more acoustic guitars and classic drums as the main instruments, whereas the keyboards act as light overtones and not the dominant force, like they are the rest of the album. “Versus” definitely translates into a new-wave ballad very well, and the male background vocals sound almost recruited from that era for the job.

The opener “Black Cat” does it’s job, setting the dark electro-goth tone for the record. The French influence makes itself known again, as most of the song is in the language, giving a strong S & M appeal. The single released for this record, “Ghosts”, seems to follow the same melodic pattern as their last hit, “Destroy Everything You Touch” did off their previous record. A good song nonetheless, it has rock and roll moments with a simple guitar solo that leads right back into the chorus, which is a simple slap in the face, with lyrics, “Just because I say I’m sorry, doesn’t mean I’m sorry.” Harsh.

The third track is more of what we love about Ladytron, driving bass beats with fluid melodies that compliment the electronica that carries it all. The bulk of this record seems to only imply subtle growth for the band. Their signature sound will always be there, but little additions to boost the record some seem to add to an 80’s revival that, until now, was more subdued. “Runaway”, “Deep Blue”, and “Burning Up” seem to be great examples of this. While still well composed catchy tunes, they seem to sound a little too familiar, in the sense that they’ve already been done.

“Kletva” is a track that I still don’t know what to do with. It seems to be more on the industrial rock side, as if their time on the Nine Inch Nails tour in 2007 rubbed off a bit. Whether this is good or bad, that will take several more listens to figure out. It feels just too out of character and out of sync from the rest of the material. While oddball tracks have worked for some bands, it seems that’s not the case here.

For fans of Ladytron, Velocifero will be a good one to add to the collection. As for new fans, I feel that a proper build up is needed for this band. Listening to their previous records first would be a better way to go about this new material. In the end, this is a quality record that keeps its hold in limbo between too much new-wave revival and just enough millennium elecrontica. Here’s hoping they don’t slip backwards.