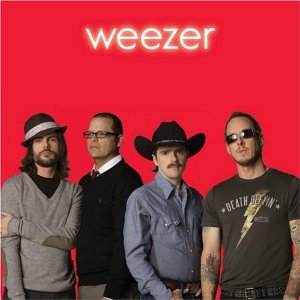 It can be said that much of Weezer’s lyrical career is grounded on the basis of attacking something or someone else. From the band’s inception, lyricist and vocalist Rivers Cuomo has found escapism in dreary-yet-punchy alternative numbers that throw and pull punches at love and misery. That is up until Maladroit, when the band started branching into a sort of ‘reinvention’ age, and most of the criticism started with the epic sentence, “Well, it’s not Pinkerton.” There’s reason for this and while Maladroit is hardly as criticized as its latter brothers and sisters, it’s certainly part of what should be considered the “other trilogy.”

Most Weezer fans will agree that the trio of albums starting with 1994’s self titled debut (The Blue Album), continuing on with 1996’s Pinkerton, and sliding home with 2001’s self titled comeback (The Green Album) represent the band at true perfect form. It’s Maladroit onward where fans start digressing, Make Believe where fans start killing one another, and then of course, this year’s self titled bastard (The Red Album). Six albums that, if diagrammed on a flow chart, would represent the ride Splash Mountain.

There’s something awry about Weezer’s sixth album. While their sense of humor should never go unnoticed, one wonders how far we’re supposed to take it, especially with lyrics like, “I’m a troublemaker/never been a faker/doing things my own way/and never giving up.” On first listen, the opening track is a bit unsettling to the stomach with its simplicity, but it’s so tongue in cheek that you can’t help but bob your head to its poppy beat. In a sense, it’s the closest this band has ever sounded like Cake, which isn’t necessarily a good or a bad thing.

By the second track, any fears of Weezer losing it with age are thrown out the window. It took six albums to do it, but finally the band has written a larger-than-life, epic song. (Though some can argue the grandiosity of “Say It Ain’t So” or “Only in Dreams”, I guess) Comparisons to Queen’s “Bohemian Rhapsody” aside, “The Greatest Man That Ever Lived (Variations of a Shaker Hymn)” is the band’s crowning achievement, complete with an arching progression, a choir of harmonies, and a rollicking chorus that will stick in your head, having you sound like an ego maniac as you chant, “I am the greatest man that ever lived/ I was born to give and give and give.” It might sound preachy, but this song represents the lyrical mindset Weezer is at these days. No longer are they dorks in basements. They’re dorks in Hollywood.

“Pork & Beans” is Weezer paint by numbers, with the clunky distortion and Cuomo’s yelp of “I’m finally dandy with the me inside”. It’s catchy and loud enough to reach the fans that walked out after 2005’s disappointing Make Believe. “Heart Songs” is a staple ballad that brings to mind the late Red Hot Chili Peppers’ slow burners, only there’s awfully cheesy lines like “I gotta admit though/ sometimes I would listen to the radio” or “It takes two to make a thing go right/If the Fresh Prince starts the fight.” Then there’s the rock and pizazz of “Everybody Get Dangerous”, a flashy, larger than life hit that’s catchy, if not forgettable by the end of the album. When Cuomo self-deprecatingly chants, “I’ve got a confession/That I will make if you will listen”, you wonder if you should start feeling bad for the guy.

One of the former demos, “Dreamin'”, is a definite keeper and eventual crowd pleaser. Its warm fuzz, sentimental breakdown, and accessible lyrics like “These are days that will define my life” are familiar yet abrasive enough to consider new. It’s actually one of the best songs they’ve released in quite some time. Much like a horrible science experiment gone bad (think of those days in high school with exploding beakers), “Thought I Knew” is a bad, bad idea gone wrong… which makes it worse, right? Turning vocal duties to ‘other’ guitarist Brian Bell leaves a stale track that sounds right at parts, but altogether is a mess that should have been left with the demos or given out as an iTunes exclusive.

It’s not even a bad decision to switch off vocal duties, really. For the most part, it works like a charm. “Cold Dark World” is a sweeping collection of chin music that is both brooding and driving. It seems destined to close a film or be layered atop the corresponding closing credits. Bassist Scott Shriner sounds vindictive and determined while singing, though lyrically Cuomo comes off creepy or stalker-like, closing the song out with “Angel girl, I’m gonna be your man/ Angel girl, I’ll make you understand.” It’s a good climb that should have closed out the album. Shortly after, drummer Patrick Wilson offers some variation on “Automatic”, a declarative rocker that will bring fans to marching boots over the next few months.

Slow song “The Angel and the One” sounds like a polished Cuomo demo that could have slid on the Alone recordings last year. Self reflective (“I’ve got the magic in me”) and depressing (“There is another love that I would rather be obeying”), it is, after all, a perfect closer, reminding listeners why they’re still with the band a decade and some change later. Most of the fans need these songs (probably as much as Cuomo does), as they offer premeditated escapes that shattered hearts and bruised egos can mend and heal in.

Parts of this album works, but that’s the problem. As a whole, it seems cluttered and confused, especially with the inclusion of “Thought I Knew” and “Everybody Get Dangerous”. It also doesn’t help that the album’s epic track sticks out like a sore thumb towards the beginning, with the latter carrying quite the weight. Much like 2005’s Make Believe, there is enough here to salvage and move on, and fortunately, there’s more here than three years ago.

A piece of advice. Don’t go in expecting a Pinkerton. In fact, don’t ever listen to Weezer again if you’re expecting Pinkerton-like results. As aforementioned, this is a different band. Pinkerton represented years and years of repressed angst and trauma. How and why would they still be writing in that lyrical key? This is a band poking fun at their surroundings: the fucked up recklessness of modern America, represented by the closest thing this world has to hell, Los Angeles.

And for that, they do a pretty damn good job.