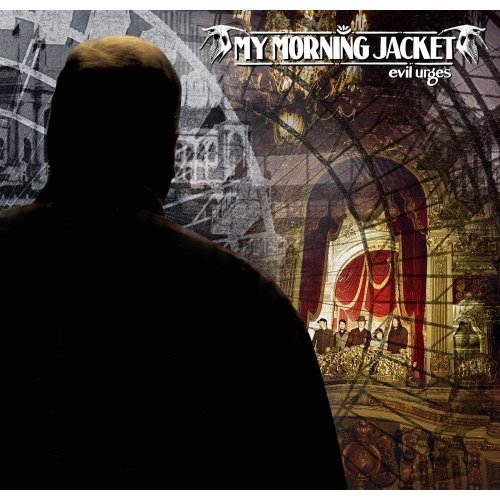 Before you push play, click play, or touch play (depending upon what level of technology you prefer your music be filtered through) and begin listening to Evil Urges, wipe clean any preconceived notions about what you think a My Morning Jacket song should sound like. On the band’s new LP, set for a June 10th release, Jim James and company blend the familiar with a departure from convention and continue to stretch and flex their sound, as well as James’ vocal chords.

For those with a more trained ear, the departures are a natural next step from what the band started to explore on Z. This is the first time, however, that they display such a difference in tempo, sound and style between songs on the same album. Fans shouldn’t worry though, this isn’t like the 78′ BMW in front of your apartment that drives you nuts with its red body and a blue hood. The contrasts here are in balance, and coexist in a state of symbiosis.

The first song to touch your ears, the title track “Evil Urges”, is a microcosm for the mood of the album as a whole. It begins with an introduction that has shades of Radiohead’s “Subterranean Homesick Alien” and Jim James singing in a rarely heard falsetto that he continues throughout. These new sounds are countered by a familiar jam section that one can easily see being extended by many minutes in a live performance.

Evil Urges is anchored in the middle by a set of traditional sounding Folk Rock beginning with “I’m Amazed” a song that gets back to James’ beautiful middle register vocals and reverb sound that the band cultivated in Kentucky. They toy with a country sound in “Thank You Too” and every more so on “Sec’ Walkin” before returning to harder rocking in “Remnants” which is highlighted by great linear guitar hooks and solo work.

My favorite moment on the album and the first time I really lost motor control of my extremities and just had to start moving my feet and head came during “Highly Suspicious”, which initially channels 80s Hip Hop before it drops heavy guitar distortion on every down beat. The vocals are a cast of two different characters and the dichotomy between James’ high pitched hero and the low growl of the antagonist helps to frame the story that the lyrics are telling, which hints at governmental paranoia and deep Orwellian themes. (Excuse a brief aside: When you’re jamming to a song on the train and you’re getting weird looks from someone who is dressed like a dominatrix, it gives you pause to reevaluate things.)

The album closes with an 8 minute electronica inspired opus called “Touch Me I’m Going to Scream Part 2”. The song ends with an abrupt scream from all members of the band which could be construed as a cathartic release of the stress and conflict most groups of artists endure when collaborating on a single piece of art.

Listening to an album for the first time with too analytical an approach can be a different and sometimes unnatural journey, one that could have you question your heading and check your course an exorbitant number of times, missing the scenery while your head is stuck in the map. This album is somewhat stylistically fractured track by track and could be described as struggling with its own identity; however, it is best navigated as a whole work, whose risky and artful contrasts serve to give the audience a sense of what the band is capable of, and potentially what they have in store for the listener in the future, a sonic warning shot across our collective bow.