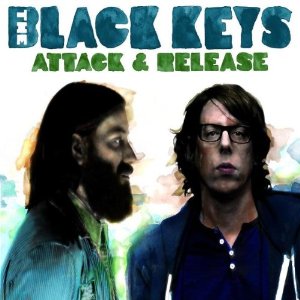 When I think of the Black Keys, I think of a true live act. I don’t think that the Keys can emulate the energy that is produced on stage, in the studio and I mean that as a compliment. They are an amazing live band. With that being said, Attack & Release comes pretty darn close. The whole album has a Delta Blues Voodoo sound that is intriguing and unique.

The album definitely sounds “produced” compared to previous Keys albums, and may turn out the bands most radio friendly track to date in “Strange Times”. “Remembering When (Side A)” begins “It happened when I heard her name” and gives a somber reminder of love lost. You can hear the disappointment and pain in Dan Auerbach’s voice, about a past relationship that didn’t quite work out. In “Remembering When (Side B)” the same lyrics now have an underlying feel of anger. The songs appear back to back on the album and compliment each other nicely. My favorite track on the album “I Got Mine” allows Auerbach and drummer Patrick Carney to flat out rock.

Throughout Attack & Release you can hear the rare talent that Auerbach and Carney share. There is an intelligent simplicity in the sound, that allows the Black Keys talent to shine threw without being showy about it. Too often, guitar players especially, feel the need to prove their talent with solos that are amazing, but not necessarily pleasant to the ear. Auerbach’s skill as a musician is evident and he recognizes the beauty of integrating silence into his music.