The Raconteurs – Consolers Of The Lonely 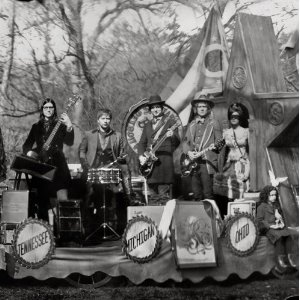 Jack White hasn’t had a breath of fresh air in almost four years. There’s a reason there are dark circles around his eyes and it has nothing to do with make up or the appeal it has on the female demographics. It was 2004 and in that year, White managed to pull some shows out, in support of The White Stripe’s now classic, Elephant. The only difference between that year and the years that followed was that no album of new material had been released. If Consolers of the Lonely and Icky Thump are any indication, he might need to do that again.

It’s not that Icky Thump and this year’s Consolers of the Lonely are unpleasant, they just lack the punch and dynamite of Elephant or Broken Boy Soldiers, respectively to both bands. Jack White’s 2006 inclusion, The Raconteur’s Broken Boy Soldiers, was everything The White Stripes was never going to be: a full fledging, enveloping garage-rock band. That’s still the case here, but it’s just not as enjoyable.

There’s a great deal of music here to appreciate. Much like Broken Boy Soldiers, guitarist and keyboardist Brendan Benson is still the best part of the album and is consistently raising the bar for Jack White. A part of me wonders what the band might sound like if he took more of a lead, but that might be like asking Dave Grohl back in 1991 to write a few songs for In Utero. Both Cobain’s and White’s faces would stare long and hard.

“Consoler of the Lonely” claws open the sophomoric release, where every member shines equally. Whether it’s White’s jive talking antics (that seem carried over from Icky Thump), Patrick Keeler’s drumming that could fill in for The Jimi Hendrix Experience, or the wobbly bass lines of Patrick Keeler, the magnificent presence this band exudes is made self aware in high volume here.

Call me crazy, but the new single, “Salute Your Solution”, sounds like a steroid built homage to 2005’s “Blue Orchid,” the single and only heavy song off the unnecessary piano laden Get Behind Me Satan. It’s still a rocking song, even if it lacks the presence and pop of “Steady As It Goes.” The band makes up for it with the album’s clincher, “You Don’t Understand Me,” which is worth the sale of the album. Benson’s piano work is chilling, White’s refrains are catchy as hell (“And there’s always a better point of view…”), and the guitar work is jaw dropping. A key track which will sweep the stage come this summer.

Then something happens, the album shifts. There’s bayou type sounds (the violin driven “Old Enough”), big band anthems (the horn infested “The Switch And The Spur”), and the seventies throwback tune (the wah wah of “Hold Up”). Each are an indication that the band is dusting off different instruments in the garage, maybe tampering with their parent’s high school instruments, I don’t know. It’s just a sign that the band’s not just stretching, they’re turning around some.

Consolers of the Lonely showcases each of the musician’s influences. The cover art is important here. Notice the band, burrowed deep into what looks like the Southern backwoods. Much of the album sounds this way, with the many slide guitars, the rugged themes, and the afternoon glaze that much of the distortion hints at. If the first half is a continuation from where Broken Boy Soldiers left off, the latter of the album is devoted to the band moving on.

That’s what makes this sophomoric effort that much harder to swallow. White has already proved to the world that he’s a man of catch and release. His songs pull you in with their individual knack and wit, or at least they once did. In “Old Enough,” when he sings, “I was naive, just like you/ I knew exactly what I wanted to do,” perhaps he’s referring to that era, a time when he accomplished everything in under a couple of minutes and throughout an entire album. If that’s the case, that might explain why everything lately has more flavor and less bite.

For an evolving musician, that’s the best insurance plan possible. Unfortunately, some listeners might not be running at the same pace he is. Nevertheless, Consolers of the Lonely is an album that only values with every listen, but that’s if you’re still likely to keep spinning it (or clicking it, you MP3 do’ers).